The first alternative coffee maker I ever used was a French Press. It was simple to understand and to use and for the most part if gave me a really good cup of coffee that was entirely different from the kind of coffee I made out of the drip machine I had used so many times before.

After a while of testing out my french press though I quickly realized how overly potent my coffee was and after asking around and poking my head around the web I realized that I should be using a coarse grind for my french press rather than the normal grind I got in my bags of pre-ground coffee at the grocery store.

After switching to a coarse grind from the supermarket grinding booth I eventually got into the market for a home coffee grinder for all my french press needs. The electric “whirly-bird” models were cheap and they didn’t really make my coffee taste much better so I ended up looking at the manual hand-crank grinders for budgetary reasons – they were just a lot cheaper than the good electric burr grinders.

Little did I know at the time but I was just beginning to learn how grinders worked… and then I stumbled into Hario, the company that has really set the bar high for manual coffee grinders.

Why Manual Grinders Work So Well

Manufacturers of manual grinders don’t have to invest in motors to turn the burrs so an inexpensive unit has more money invested into the burrs and mechanisms needed to grind beans into a consistent grind. 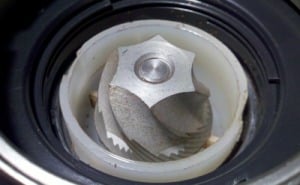 What does that mean?

It means the burrs tend to be really high in quality relative to their entry level electric counterparts. It also means the burrs do not “wobble” or “slip” as much which is key to producing a consistently sized and shaped coffee grind.

So Which Manual Grinder is Best for French Press? 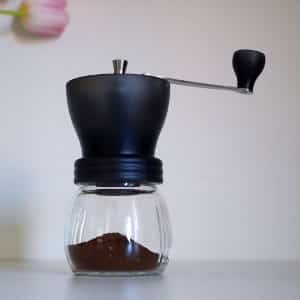 For all manual and electric grinders priced under about $100 it tends to be harder to produce really consistent grind. For years the Hario Skerton (and to a lesser degree the Hario Slim) has been the best manual coffee grinder for french press because it’s got quality burrs that are very stable. My testing has consistently showed me that this hand grinder is best but not too long ago Hario made the Skerton even better when they released an upgrade kit for the Skerton specifically targeting french press coffee drinkers.

The upgrade kit is super cheap and it’s just a small disk that is inserted between the main parts to the grinder body. The disk further stabilizes the movable burr in the coarse grind setting making the grind even better for steeping in a press pot.

By far and away I recommend more than anything else the Skerton with the upgrade disk to anyone interested in making French press coffee at home… you know, unless they are willing to spend a few hundred bucks on a grinder then I start recommending some higher end electric models. For the average Joe however the manual Skerton is the best and it’s set at a super affordable price. It’s even listed in our prior post of top coffee grinders under $50.

There are cheaper manual crank grinders out there and they are easy to find if you want the cheapest possible but the best for your money will be with Hario. And if you really are looking to spend less then moving down to the Hario Slim will save you a few bills. It’s still pretty good, just not the best.